Immediately after I tweeted my Thanksgiving pies on Twitter, I had a ton of people asking for the recipes! I always sort of whip up recipes without measurements, but now I will make a note to do so 😉 Below are the recipes for the Healthy Pumpkin & Apple Pies. 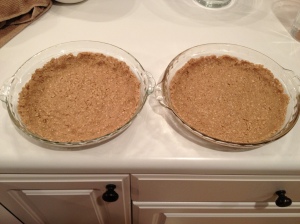 First, make a crust for each pie.

Crust ingredients (for one pie):
1 cup flaked unsweetened organic coconut
1 cup pecan pieces
1/2 cup oat flour
1/2 cup organic light brown sugar
2 teaspoons ground cinnamon
5 tablespoons vegan butter
Instructions:
Preheat the oven to 350ºF. Place all of the dry ingredients into a food processor bowl and pulse until the mixture looks like coarse sand. Add in the butter and pulse several times in short bursts until the crumbs are moist.Dump the crumbs into the cake pan and spread them evenly. Using your fingers gently press the crumbs across the bottom and up the sides- about 2/3 of the way up. Bake in the center of the oven for about 7 minutes- to set. Remove the pan and set aside.
**

Add pumpkin puree, eggs, almond milk, pumpkin pie spice and salt to a large bowl. Whisk well. Pour filling in crust and  bake at 350 degrees 40 – 50 minutes or until center is set. Let the pie cool down and top with pecans. 🙂

To prepare the filling, place the apples in a mixing bowl and squeeze the juice from the lemon half over all of the apples.  Toss to evenly coat. Add the granulated sugar, oat flour, 1/2 teaspoon of cinnamon, and ginger to the mixing bowl, and stir to combine.

To prepare the topping, combine the flour, dark brown sugar, rolled oats, and remaining 1/2 teaspoon of cinnamon in a separate mixing bowl. Cut the butter into small chunks and use fingers to rub the butter into the mixture until it resembles the consistency of wet sand.

Bake the pie for approximately 45 minutes, until the crust and topping are golden and the filling is bubbly. Cool on a wire rack before slicing. Best served with some dairy free coconut milk vanilla ice cream!

Error: Twitter did not respond. Please wait a few minutes and refresh this page.